A permit for road construction is in place, and weather permitting, road opening into the main exploration camp and drilling areas will be initiated in the next two weeks.  The plan calls for the re-opening of approximately 65km of winter road, passing Purepoint Uranium Group’s turnoff to Hook Lake at 15km in, and the Azincourt camp at Bolton Lake Wilderness Lodge, at 55km. A preliminary open to the lodge should be in effect by Christmas, after which an additional 8km of new winter road will be established into the Five Island Lake area (central to the Zone-A and Zone-B targets as referenced in the Company’s Drill Plan news release dated December 4, 2019).

Drill mobilization is then scheduled for January 2020, following receipt of 2020 drill/work permits, which are expected to be received sometime in the next few weeks.

As detailed in the December 4, 2019 Company news release, drill target prioritization has been completed, based on compilation of results from the 2019 winter drill program and 2018 and 2019 ground-based EM & gravity surveys, and property-wide helicopter-borne Versatile Time-Domain Electromagnetic (VTEM™ Max) and magnetic surveys.

The proposed $1.2M drill program will focus on prospective targets in the Five Island Lakes area with 2000-2500m (up to 15 holes) of diamond drilling at 8-to-10 pad locations. The Company will continue to provide updates as permitting is received, groundwork commences, and drill mobilization begins over the next few weeks. 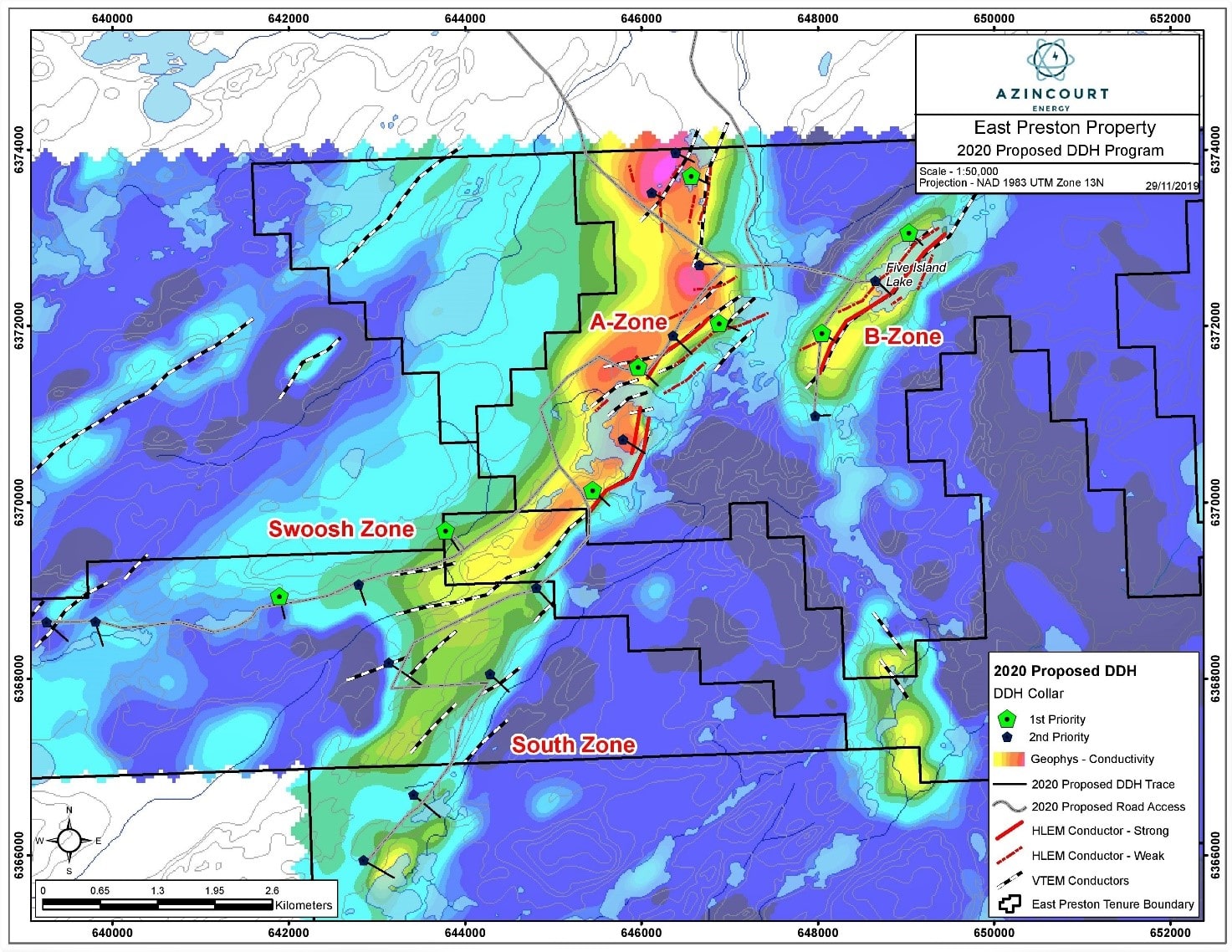 Azincourt is currently earning towards 70% interest in the 25,000+ hectare East Preston project as part of a joint venture agreement with Skyharbour Resources (TSX.V: SYH), and Clean Commodities Corp (TSX.V: CLE). Extensive regional exploration work at East Preston was completed in 2013-14, including airborne electromagnetic (VTEM), magnetic and radiometric surveys. Three prospective conductive, low magnetic signature corridors have been discovered on the property. The three distinct corridors have a total strike length of over 25 km, each with multiple EM conductor trends identified.  Ground prospecting and sampling work completed to date has identified outcrop, soil, biogeochemical and radon anomalies, which are key pathfinder elements for unconformity uranium deposit discovery.

The Main Grid shows multiple long linear conductors with flexural changes in orientation and offset breaks in the vicinity of interpreted fault lineaments – classic targets for basement-hosted unconformity uranium deposits. These are not just simple basement conductors; but clearly upgraded/enhanced prospectivity targets because of the structural complexity.

The targets are basement-hosted unconformity related uranium deposits similar to NexGen’s Arrow deposit and Cameco’s Eagle Point mine. East Preston is near the southern edge of the western Athabasca Basin, where targets are in a near surface environment without Athabasca sandstone cover – therefore they are relatively shallow targets but can have great depth extent when discovered. The project ground is located along a parallel conductive trend between the PLS-Arrow trend and Cameco’s Centennial deposit (Virgin River-Dufferin Lake trend).

In early 2019 the Company conducted a small initial diamond drill program totaling 552 meters. The results confirmed the prospectivity of the East Preston project, as basement lithologies and graphitic structures intersected at East Preston were found to be very similar and appear to be analogous to the Patterson Lake South-Arrow-Hook Lake/Spitfire uranium deposit host rocks and setting.