The initial drill campaign has confirmed the prospectivity of the East Preston project, as basement lithologies and graphitic structures intersected at East Preston are very similar and appear to be analogous to the Patterson Lake South-Arrow-Hook Lake/Spitfire uranium deposit host rocks and setting.  A total of 552 meters of drilling was completed in three holes prior to the onset of spring break-up conditions that impacted the duration of the program.  The rapid onset of spring required shifting from entirely overland-supported drilling to helicopter-supported drilling. All drill holes targeted multiple closely spaced discreet graphitic conductors with coincident gravity low anomalies often indicative of alteration or thicker overburden due to enhanced glacial scouring over altered, or structurally disrupted basement.

“We are certainly very pleased with the results of the first few holes, it’s an excellent start to initial drill testing at East Preston,” said president & CEO, Alex Klenman. “We have confirmed the project contains the appropriate environment – both geologically and geochemically – that is consistent with uranium mineralization in the area.  That’s a significant confirmation, and to be able to determine this at the outset is very positive development.  These are the right graphitic-rich host rocks and given we have just started drilling, we’re obviously optimistic about what’s ahead. We have dozens of high priority targets yet to drill, and thanks to recent substantial institutional support we are well funded to execute a much larger phase two program.  Permitting is already underway, we have the cash, and we have the targets.  Our timing looks good with sector developments as well. We’re excited to get more drills in the ground and will announce details of the upcoming phase two drill campaign in the coming weeks,” continued Mr. Klenman.

“We are highly encouraged with our first drill program results at East Preston,” said Ted O’Connor, Director and Technical Advisor for East Preston. “We have confirmed that we have prospective graphitic basement rocks and the right basement unconformity setting on the project. There are numerous conductor corridor system targets to test as we vector towards areas of structural disruption; all critical ingredients as we continue development of East Preston,” continued Mr. O’Connor.

The East Preston project lies immediately south of the interpreted southern edge of the Athabasca Basin, so no Athabasca sandstone was expected.  Overburden thickness ranged from 15 to 33 m thick, and as expected, no Athabasca sandstone was intersected.  Numerous untested graphitic conductive trends remain on the project for drill testing, and additional targets have been generated from the recent VTEM survey that now covers the entire East Preston project lands.

A photo accompanying this announcement is available at https://www.globenewswire.com/NewsRoom/AttachmentNg/a8cd7bfb-e51b-4832-a9f8-4f965fcb421f

EP19001 (Pad B, 094/-45°): PAD B on L2400 targets the confluence of north- and northeast-trending conductors (prospective structure) with a coincident gravity anomaly (potential alteration), and a positive airborne radiometric anomaly (a potential mineralization indicator).

This hole successfully intersected graphite-rich intermediate-mafic (semipelitic?) gneiss and schist units between 105-145m (5-10% graphite), and 157.2-181.9m (2-5% graphite). Both intervals are sandwiched between granitic to granodioritic orthogneiss. Lithology variations and graphite content are significant enough to explain the geophysical conductor targets at this location.  Overall alteration intensity is considered low to moderate. Radiometric anomalies are limited to biotite-rich fractures +-blue quartz or pods within pegmatitic granite subunits. The targeted hole successfully intersected graphite-laden structures/lithologies that are similar in character to host lithologies along the Patterson Lake trend.

This hole intersected graphitic conductive lithologies significantly earlier than the predicted Maxwell-plate predicted depth of 155m, but in league with VTEM predicted conductor traces. Overall lithologic sequence is similar to holes 1 and 2, but overall graphitic content is higher in this hole. Garnet metamorphic overprint is high with low carbonate alteration. Pyrite content is also significantly elevated in the 54-61.5m interval. The highest count of 368 cps occurs at 50.5m depth in a pegmatitic granite immediately adjacent to the first graphitic fault gouge. 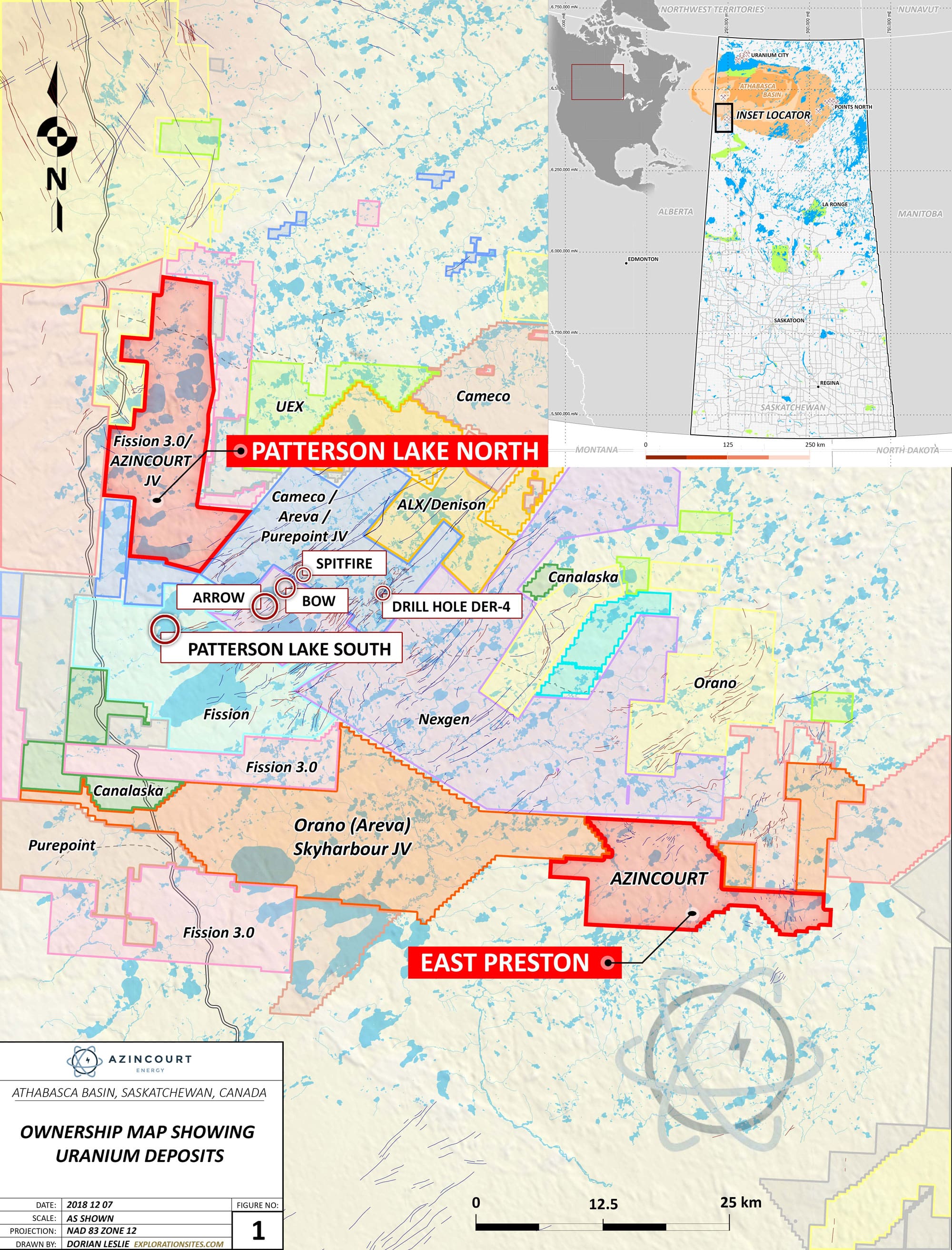 A photo accompanying this announcement is available at https://www.globenewswire.com/NewsRoom/AttachmentNg/2de2f8be-1f42-4254-8050-dbcdd26404d1

Drill core samples were interval grab samples of interesting lithologies from 0.7m to 2 m in length, split in half longitudinally, with one-half of the core retained, and the other half placed in sealed bags and shipped to SRC Geoanalytical Laboratories (SRC) in Saskatoon, SK for sample preparation, processing and ICP-MS multi-element analysis using Total and Partial digestion, gold by fire assay and boron by fusion. SRC is an ISO/IEC 17025/2005 and Standards Council of Canada certified analytical laboratory. The Company’s Qualified Person for the drill program, Mr. Ted O’Connor, has verified the data disclosed, including drilling, sampling and analytical data. The program is designed to include analytical quality assurance and control routines comprising the systematic use of standards, blanks and duplicate samples.

Alex Klenman, President & CEO
Tel: 604-638-8063
This email address is being protected from spambots. You need JavaScript enabled to view it.