The Macusani-Cuzco land position is adjacent to the western edge of Plateau Uranium’s (TSX.V: PLU) Macusani Project, which contains the high-grade Falchani discovery with consistent 3,000-3,500 ppm Li over 100m true thickness at depth, and U3O8 grades up to 500 ppm over 50m intercepts from surface*.  In addition, surface sampling at Falchani yielded results up to 9,766 ppm U3O8 with 12 samples exceeding 0.1% U3O8, and Li values up to 1,140 ppm Li with 16 samples exceeding 400 ppm Li*.

“We’re pleased to be able to announce this LOI and look forward to executing the due diligence process,” said Alex Klenman, president and CEO.  “We’re very aware of the public announcements made by Plateau Uranium, and very impressed with their progress on the plateau and their new Falchani discovery, which features not only high-grade lithium intercepts, but also high-grade uranium mineralization. The Macusani Plateau is both unique and underexplored, and this acquisition allows Azincourt to place a major footprint in what is proving to be an emerging world class district,” continued Mr. Klenman.

The unique volcanic rocks representing the youngest eruptions on the Macusani Plateau host multiple uranium deposits with reported favourable economics (Plateau Uranium – Macusani Project) and are highly prospective for additional discoveries of lithium mineralization at depth as well as uranium-rich surface mineralization. The older volcanic and intrusive rocks deeper in the volcano-plutonic sequence discovered near the present-day edge of the Macusani Plateau also host substantial silver-lead-zinc resources (Bear Creek Mining – Corani Project) and the San Rafael Tin Mine, the largest high-grade tin deposit in the world that has been in production for over 60 years.  Other companies including Rio Tinto and Fission Uranium are also active in the area. 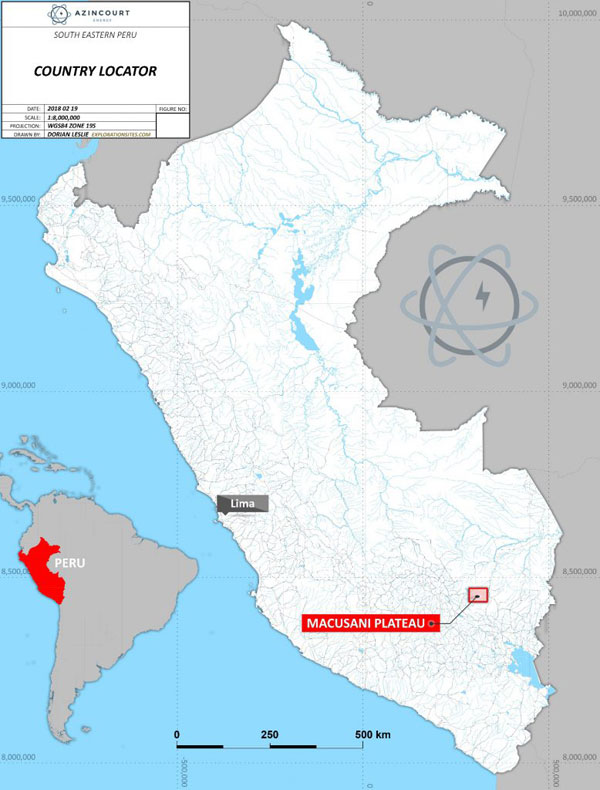 In consideration for the acquisition of 99.5% of the outstanding share capital of Guevan Petroleum, the Company has agreed to complete a series of share issuances over a twelve-month period totaling 4,000,000 common shares.