The new Lithman East Extension Project connects with two of the Company’s current lithium projects, namely Lithman East and Lithium One, to form an adjacent total project area of 7,867 hectares.  The land package features the Bernic Lake Formation, the geological unit/formation that hosts the Tanco Pegmatite and several other lithium bearing pegmatites, and the Axial Pegmatite Group.  Historical Government of Manitoba academic work on the Axial Pegmatites has shown them to be well fractioned and evolved. 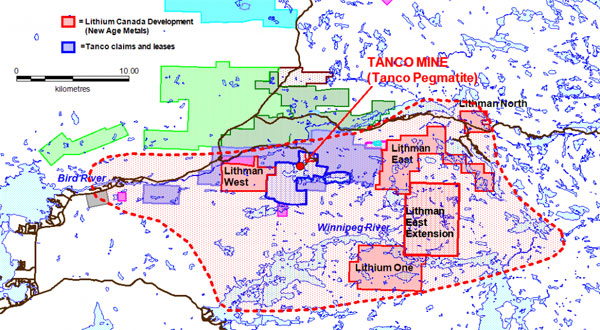 “The project is situated over several axial planes of regional folds, as is the Tanco Pegmatite. The giant world-class Tanco Pegmatite has been postulated to be situated in a limb of fold and is located along strike approximately 10 kilometers to the west of the project area. The axial plane trace of this fold runs through both the Lithman East Project while it’s postulated extension and other axial planes runs through the newly acquired Lithman East Extension Project. The exploration focus of the region is to find and explore lithium-bearing pegmatites with the possibility of discovering a pegmatite as large and as mineralogically rich as the Tanco Pegmatite.”

“This expansion of our project area in southeast Manitoba is strategically important,” said president & CEO, Alex Klenman.  “The area is pegmatite rich, and the New Age team has done an excellent job adding value to the project.  The lithium sector has cooled considerably since the start of the year, but this isn’t stopping us from executing the plans we have to build our market cap.  When the sector turns, we are confident we will get credit for both this acquisition, and the current work we’re doing,” continued Mr. Klenman.

Work permits have been applied for with the province of Manitoba for surface exploration at the Lithium East Extension. Once the permits are granted, field crews will be mobilized. Exploration on the Lithman East Extension Project will consist of prospecting and sampling the known surface pegmatites and their surrounding areas.

The recent project acquisition of claims has made the New Age Metal/Azincourt Joint Venture the largest claim holder for Lithium in the Winnipeg River Pegmatite Field as well as the largest mineral claim holder in southeastern Manitoba.

This addition to the original JV agreement with New Age Metals commits Azincourt to an additional $250,000 worth of exploration spend over the life of the partnership and has increased the 2018 exploration budget by $100,000.  New Age Metals will also receive and additional 250,000 shares of Azincourt as part of the terms of the deal.  For complete terms of the existing agreement please refer to the Azincourt news release dated January 15, 2018.

Immediate exploration work will primarily focus on the Lithium 1 and Lithium 2 projects, with a field program that includes mapping of known pegmatite outcroppings. The Company will begin sampling specific areas over the next few weeks before drilling is scheduled to begin in June.

Samples collected in 2016 at the Eagle Pegmatite returned a range of 0.02% to 3.04% Li2O, and up to 2.08% Li2O from the FD5 Pegmatite.  Select sampling will concentrate on the Eagle and FD5 pegmatites at Lithium Two, and on the Silverleaf Pegmatite at Lithium One, which returned sample values as high as 4.33% Li2O during the 2016 exploration program.

Azincourt Energy is a Canadian-based resource company specializing in the strategic acquisition, exploration and development of alternative energy/fuel properties, including uranium, lithium, cobalt and other elements.