The new Cat Lake Lithium Project consists of nine claims for a total of an approximately 2000 hectares located directly north of the Company’s Lithium Two Project.  The Lithium Two Project contains several lithium bearing pegmatites with a historic non-43-101 compliant drilled resource on the Eagle Pegmatite of 545,000 tonnes of 1.4% Li2O to a depth of 60 meters. Historical reports have suggested that the Eagle Pegmatite is open to depth and along strike.

The new acquisition increases the Company’s presence in the Cat Lake area which has seen a rise in recent exploration activity from companies such as Quantum Minerals, Mustang Minerals and Equitorial Exploration. The new claims are situated north of Quantum Minerals recent claim acquisition. They are staked over portions of the greenstone belt at Cat Lake and along the trend that hosts the Irgon Pegmatite (Quantum Minerals), both of which host lithium-bearing pegmatites. 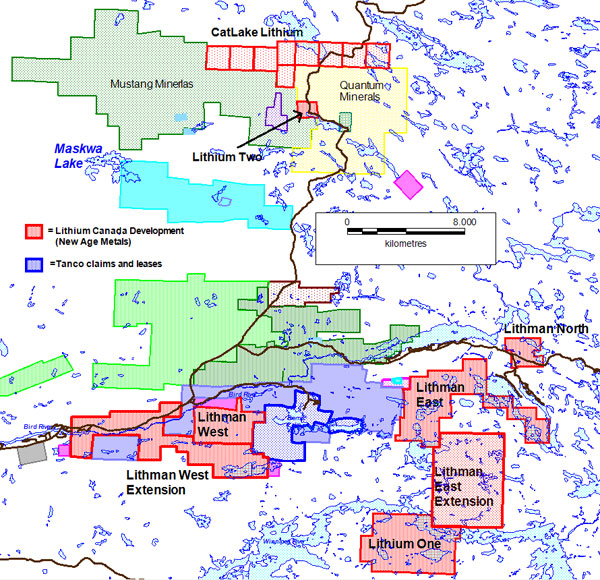 “We’re pleased to add this ground, which we consider highly prospective,” said president & CEO, Alex Klenman.  “The area in and around Cat Lake contains known lithium-bearing pegmatites and historical resources.  This specific addition, with all the work being done in the area, adds considerable upside to the overall portfolio.  We now control a sizeable footprint in a growing lithium exploration district and we look forward to unlocking it’s potential,” continued Mr. Klenman.

The pegmatites in this region of southeast Manitoba are described as being a part of the Winnipeg River Pegmatite Field. Several large lithium-bearing pegmatites exist in this region and exploration activity in the region is increasing. This pegmatite field is host to the world-class Tanco Pegmatite, which is a highly fractionated Lithium-Cesium-Tantalum (LCT Type) pegmatite and has been mined in varying capacities since 1969. The LCT-type pegmatites can contain large amounts of Spodumene (one of the primary ores used in hard rock lithium extraction) and are a primary geological target in hard rock lithium exploration. They also can contain economic qualities of tantalum and cesium as well as other lithium bearing minerals such as mica.

The acquisition of this new project and other recent acquisitions has made the New Age Metals/Azincourt Energy Joint Venture the largest claim holder for Lithium Projects in the Winnipeg River Pegmatite Field.  At present, the Joint Venture has eight projects totalling over 14,000 hectares in the Winnipeg River Pegmatite Field.

Preliminary field work and additional ground proofing is currently underway on the Lithium 2 Project.  Field work here, and on all of the targeted projects, consists of prospecting, mapping and sampling that will generate data on the lithium-bearing properties of the pegmatites contained in the New Age/Azincourt project portfolio.

A primary objective of this work at Lithium 2 is to finalize drill plans and initiate the 2018 drill program.  A 3000-meter preliminary drill program is scheduled to commence this summer at both the Lithium 1 and Lithium 2 projects. Management of both companies plan to update their shareholders and interested parties with regular updates from the ground over the coming weeks and months.

This addition to the original JV agreement with New Age Metals commits Azincourt to an additional $250,000 worth of exploration spend over the life of the partnership and has increased the 2018 exploration budget by $100,000.  New Age Metals will also receive and additional 250,000 shares of Azincourt as part of the terms of the deal.  For complete terms of the existing agreement please refer to the Azincourt news release dated January 15, 2018.

Azincourt Energy is a Canadian-based resource company specializing in the strategic acquisition, exploration and development of alternative energy/fuel properties, including uranium, lithium, cobalt and other elements.