Vancouver, BC – October 24, 2018 - Azincourt Energy Corp. (“Azincourt” or the “Company”) (TSX-V: AAZ, OTC: AZURF) is pleased to announce the commencement of its initial work program at the recently acquired series of uranium-lithium exploration projects located in the Picotani volcanic field in Carabaya and San Antanio De Putina Provinces, Puno Region, in southeastern Peru, collectively known as the “Escalera Group”.

The Projects cover a combined area of 7,400 hectares of prospective exploration targets for volcanic hosted supergene/surficial uranium and lithium on the Picotani Plateau (or “mesata” in Spanish).   Surface rock samples obtained in 2017 from the Escalera project were processed by ALS Minerals, in Lima, Peru, and returned values of up to 3,560 ppm uranium and 153 ppm lithium.  Historical samples taken from the Escalera project have yielded values up to 6,812 ppm uranium* (see table below).

A crew of experienced geologists familiar with the area are assembling in country over the next ten days and are immediately commencing a comprehensive phase one work program at all three concessions forming the Escalera Group (Escalera, Lituania, Condorlit), which is expected to last throughout the month of November.

“We’re pleased to get on the ground and start the work programs there,” said president & CEO, Alex Klenman. “As we know, the Macusani-Crucero-Picotani area is very mineral-rich environment, with uranium, lithium and other metals present.  Both recent and historical sampling at the Escalera Group have returned very solid uranium numbers, so we’d like to confirm and expand on that success.  The data we glean from this initial work program will give us a better understanding of the geological footprints at each site and will allow us to zero-in on drill targets. Our goal is to get the projects to drill-ready status as soon as possible,” continued Mr. Klenman.

The initial work program will focus on full digital data compilation of detailed geological mapping, reconnaissance level scintillometer radioactivity surveying, and surface rock and soil sampling with the purpose of generating high-priority drill targets for subsequent work programs. The program is being managed by Michael Moore, P. Geo., who has both extensive Latin American and uranium exploration experience.  Results from this program will be released once received, reviewed and verified.

The Macusani-Crucero-Picotani Volcanic Fields have been of interest for uranium exploration since the 1980’s.  A 1981 report by the International Atomic Energy Agency** examined the Macusani-Crucero-Picotani area and concluded “…the large Crucero to Picotani basin, although having less well exposed occurrences may have more potential. Isolated outcrops of the volcanic sequence around the rim of the basin may have been available both during sedimentation and later basin evolution, leading to the accumulation of significant deposits.”

The projects are accessible year-round via paved/dirt road access, with a national airport only 130km to the south. 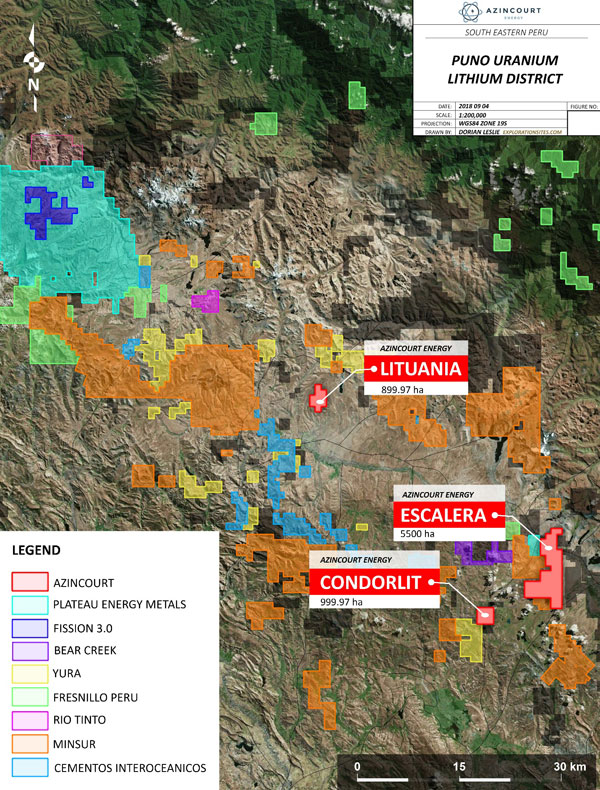 The technical information in this news release has been reviewed and approved by Michael Moore,  P.Geo, an independent Qualified Person under National Instrument 43-101.

Azincourt Energy is a Canadian-based resource company specializing in the strategic acquisition, exploration and development of alternative energy/fuel projects, including uranium, lithium, and other critical clean energy elements.  The Company is currently active at its joint venture East Preston and Patterson Lake North uranium projects in the Athabasca Basin, Saskatchewan, Canada, and its lithium exploration projects in the Winnipeg River Pegmatite Field, Manitoba, Canada.