VANCOUVER, British Columbia, Oct. 25, 2018 (GLOBE NEWSWIRE) -- Azincourt Energy Corp. (“Azincourt” or the “Company”) (TSX-V: AAZ, OTC: AZURF) is pleased to announce that its joint venture partner, New Age Metals (TSX.V: NAM), has signed an Exploration Agreement with the Sagkeeng First Nation, the result of which provides a clear path to the Company’s proposed drill programs at the Lithium One and Lithium Two projects. 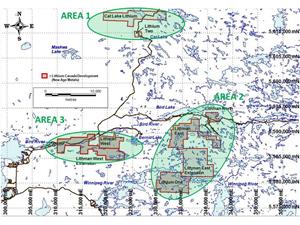 The agreement is designed to promote a cooperative and mutually respectful relationship and ensure that Sagkeeng has been properly consulted and accommodated regarding mineral exploration activities undertaken by in Sagkeeng’s traditional territory.

“We’re very pleased New Age Metals was able to reach an agreement with the Sagkeeng Nation and are grateful to Chief Henderson and the others who worked together to get this agreement in place,” said Alex Klenman, President & CEO.  “This is a major step toward developing our lithium projects and we’re happy to be able to move forward in short order and complete our work commitments for year one of the joint venture agreement.  We believe very strongly the projects have tremendous upside and are pleased to get the all important first phase drilling components completed,” continued Mr. Klenman.

There is a total of eight projects totaling over 14,000 hectares in three distinct areas that comprise the AAZ-NAM joint venture lithium exploration and development agreement.  Work programs this past summer and fall confirmed the presence of several hundred pegmatites across the various project locations. Sampling at the Lithium Two project, specifically the Eagle and FD5 Pegmatites, returned the presence of high-grade Li2O (Lithium Oxide). See Company news release of August 16, 2018 for more details.

The pegmatites in this region of southeast Manitoba are described as being a part of the Winnipeg River Pegmatite Field. Several large lithium-bearing pegmatites exist in this region and exploration activity in the region is increasing. This pegmatite field is host to the world-class Tanco Pegmatite, which is a highly fractionated Lithium-Cesium-Tantalum (LCT Type) pegmatite and has been mined in varying capacities since 1969. The LCT-type pegmatites can contain large amounts of spodumene (one of the primary ores used in hard rock lithium extraction) and are a primary geological target in hard rock lithium exploration. They also can contain economic qualities of tantalum and cesium as well as other lithium bearing minerals such as mica.  With eight projects totaling over 14,000 hectares the Azincourt-New Age JV is the largest claim holder for Lithium Projects in the Winnipeg River Pegmatite Field.  For a map of the project locations please visit www.azincourtenergy.com.

Azincourt Energy is a Canadian-based resource company specializing in the strategic acquisition, exploration and development of alternative energy/fuel projects, including uranium, lithium, and other critical clean energy elements.  The Company is currently active at its joint venture East Preston and Patterson Lake North uranium projects in the Athabasca Basin, Saskatchewan, Canada, and its lithium exploration projects in the Winnipeg River Pegmatite Field, Manitoba, Canada.