Saskatoon, SK, January 20, 2015 – AZINCOURT URANIUM INC. (“Azincourt” or “the Company”; TSXV:AAZ), and its joint venture partner and operator, Fission 3.0 Corp (“Fission 3.0”; TSXV:FUU), are pleased to announce a $1.45M winter 2015 exploration program to comprise a 3,250m 7 hole drill program and 35.2 line-km small loop time domain electromagnetic (SMLTEM) ground geophysics at their PLN project in Canada’s Athabasca Basin. The program follows a successful summer 2014 drill program, which identified and drill tested a mineralized corridor to approximately 700m in length. Of note, the drilling intersected anomalous uranium mineralization on the “A1” EM conductor in hole PLN14-019 and returned highly prospective results in holes PLN14-020 and PLN14-021. The tremendous potential of the area is highlighted by the recently reported results from Fission Uranium Corp’s PLS property located immediately adjacent to the south of PLN with the announcement of the resource estimate of the large, shallow, high-grade Triple R deposit, which included 79.6M lbs of U3O8 indicated and 25.9M lbs U3O8 inferred (See Fission Uranium news release January 9, 2015). Tentative start to the winter program will be early February, pending successful financing.

Ted O’Connor, President and CEO of Azincourt, commented,
“The shallow basement uranium mineralization and positive results from the summer drilling combined with targets generated on the two new untested areas highlight PLN is an exciting project. The success and large resource identified by Fission Uranium at Paterson Lake South solidifies the area as one of the most compelling high-grade uranium regions in the world. Azincourt is committed to completing the Year 2 earn-in at PLN alongside our partner, Fission 3.0 and we are in the midst of financing efforts to fund the remaining $1.45 million required under the JV agreement, to earn 20% project interest in PLN.” 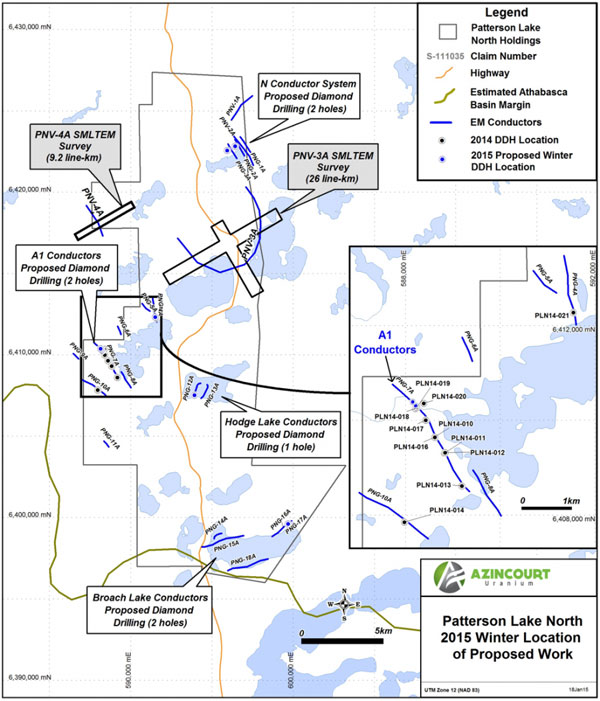 Azincourt has a staged, four year option agreement with Fission 3.0 dated April 29, 2013 whereby Azincourt can earn up to a 50% interest in the PLN project through a combination of option payments and exploration work funding. Approximately $4.7 million has been spent on prior exploration of the property by Fission Uranium. Azincourt has completed Year 1 funding of the option and presently holds a 10% interest. Fission 3.0 is the operator and project manager.

The technical information in this news release has been prepared in accordance with the Canadian regulatory requirements set out in National Instrument 43-101 and reviewed on behalf of the company by Ted O’Connor, P.Geo. President and CEO of Azincourt, a qualified person.

Azincourt is a Canadian based resource company specializing in the strategic acquisition, exploration and development of uranium properties and is headquartered in Vancouver, British Columbia. Azincourt currently holds a 10% interest in the PLN exploration project joint venture with Fission 3.0 in northern Saskatchewan, with an option to earn up to 50% of the project.

Ted O’Connor, President & CEO
Azincourt Uranium Inc.
Tel: 604-638-8063
This email address is being protected from spambots. You need JavaScript enabled to view it.

Mario Vetro
Corporate Development/Investor Relations
Tel: 778-846-9970
This email address is being protected from spambots. You need JavaScript enabled to view it.